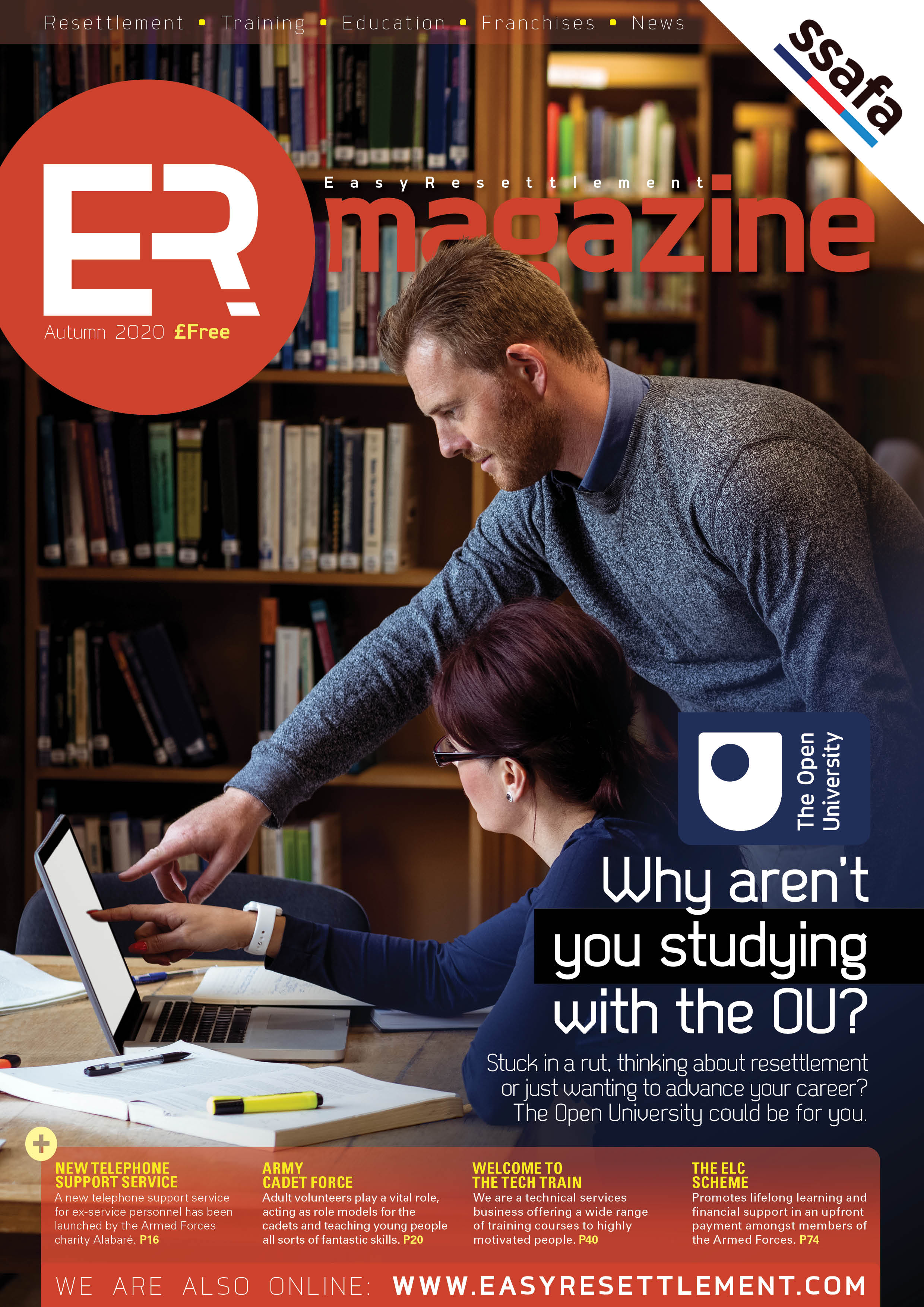 Easy Resettlement is a quarterly publication. See what is in the latest Autumn edition.

Many young people are missing out on the challenges and adventures that could transform their lives but the Army Cadet Force (ACF) aims to change that by giving young people – from all walks of life – access to fun, friendship, action and adventure. With 41,000 cadets and over 9,000 adults in more than 1,600 locations, the ACF is making a big impact on people and communities all around the UK.
Adult volunteers play a vital role in the Army Cadet Force – acting as role models for the cadets and teaching young people all sorts of skills from fieldcraft, skill at arms and adventurous training through to music and first aid. As well as the satisfaction of seeing young people achieve what they never thought possible, volunteers also have the opportunity to learn new skills, gain qualifications and make new friends.
Army Cadet Force volunteers come from all sorts of backgrounds and those with military experience excel in helping to deliver the broad range of adventurous and military themed activities the cadets love.
Philip Kendrick was in the Royal Engineers for 18 years (five years at 33 Explosive Ordnance Disposal Regiment, five years as a Combat Engineer and eight years as an Armoured Engineer) and served on Operations in Iraq, as well as on Exercises in Kenya, Cyprus, Belize, Canada and Germany. Before joining the army Philip was a cadet with the ACF. When he was medically discharged from the army, due to a severe neck injury, he decided to put his experiences to good use: “I always said when I leave the army I will go back as an adult volunteer to help if I can in any way to give something back”.
As well as working full-time as a Deputy Production Supervisor and Weighbridge Administrator, Philip is a volunteer Sergeant Instructor with Bovington Detachment, Dorset ACF. He joined in 2015 and is enjoying every minute: “It’s important to have fun and we do. I get the chance to experience new challenges, new adventures and meet new people every time I go away or on a course. I have made some amazing friends who will be friends for life. I am a happy, outgoing person normally, but am at my peak when I do anything with the ACF” he says.
Philip’s ACF training and experience has also benefitted his career prospects – helping him to secure job interviews and giving him practical examples of coaching and mentoring skills to talk about with recruiters. He is now in the process of signing up for the City and Guilds Level 4 Award in Leadership and Management, through the ACF’s partnership with the educational charity CVQO, which is just one of the many subsidised vocational training courses on offer to volunteers.

Helping young people to develop
However the best and most unique part about being in the ACF, according to Philip, is seeing how the cadets benefit:
“As a volunteer it has given me immense pride watching the cadets achieve and overcome some of their own problems. The cadets always surprise me with their effort, commitment and spirit and the best thing is that I get to be part of it. There is a real sense of family, friendship, equality and inclusion within the Army Cadets.”
Philip would encourage others to join as volunteers: “You can’t teach experience and, with the right attitude and willingness to learn how the ACF works as a youth organisation, I’d encourage any former soldiers to join up.”

From the Army Reserve to the ACF – Helen Smail’s story
Though she’s now Officer Commanding of A Company, Hereford & Worcester ACF, Helen Smail didn’t intend to join the Army Cadet Force.
Helen joined the Army Reserve as a way to meet new people and develop a hobby, completing her officer training after three years. When her Colonel suggested that upon leaving she join the ACF as an adult volunteer, she wasn’t sure.
“Until then, I’d always thought I wouldn’t have the patience for young people,” she says. What began as an uncertain decision turned into a lifelong passion that has shaped her personal and professional development.

Using your skills to help others
“The ACF is like the Army Reserve,” Helen says. “You move somewhere and you have a new family. You understand the beast regardless of where you are. People have specific jobs and run specific training. And wherever you go, people want the tools in your belt. If you’ve got skills, they want your help.”
Initially Helen had a lot to learn about working with young people. She wasn’t sure if she would enjoy it or be any good at it, but that quickly changed. She loved the tangible impact she had on the cadets, how much fun she had with them and how they challenged her abilities.
“It’s a bit of a stretch,” she says. “It’s enjoyable but not always easy. You can see a lot of positive changes from your influence. It’s great to see a cadet come in at 12 years old and then see them leave at 18, when they’ve come such a long way in confidence, self-worth and their ability to achieve. It’s powerful.”
So powerful, in fact, that it prompted a major career shift. Helen was working as a Research Scientist, but she retrained to become a Science Teacher and further her positive influence on young people. She’s been teaching for over 10 years now, a career she would have been unlikely to consider if it weren’t for the ACF.

Opportunities for leadership growth in the ACF
In her current role as Officer Commanding Helen manages over 30 adults and 200 cadets. “I oversee seven detachments – planning training weekends, managing people, making decisions, looking after both the adults and the cadets. It’s an extensive role, and very rewarding.”
Through the ACF she’s also completed a Master’s Level vocational qualification in Leadership, a qualification that’s recognised by many employers: “It nearly killed me to do it – it was a lot of work – but I realised how much I’ve accomplished.”

Seeing what other people can achieve
Even though there are lifelong friends to be made, outdoor adventures to be had, and professional qualifications to be gained, the biggest reward the ACF offers its adult volunteers is seeing others achieve. Helen illustrates this with the story of a cadet she’s known for over three years, who’s grown from a quiet and reserved young woman to a confident leader.
“She’s progressed to the rank of cadet RSM, she’s amazing. She works at the National Challenge Service now [a charity that runs summer camps for young people], and her capacity is massive. I think she’d say a large part of that is from the ACF encouraging her to take on leadership roles.”