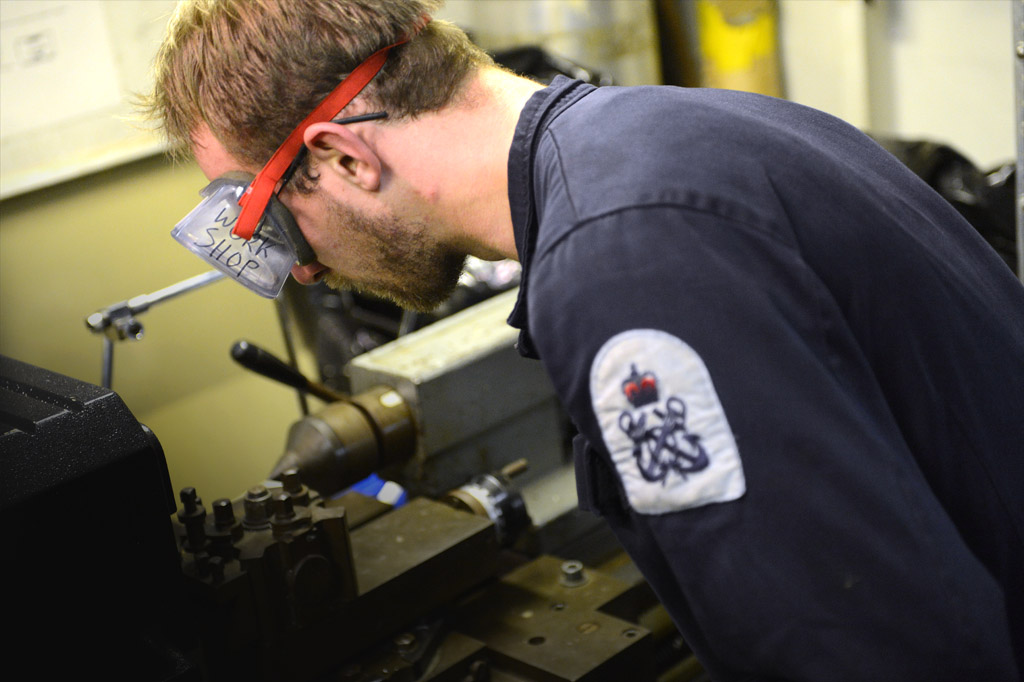 A Petty Officer Engineering Technician (Marine Engineering) makes a repair using a lathe to a vital component onboard HMS Northumberland.

It is acknowledged that the UK is facing a chronic skills gap.

According to the Government’s recent Employer Skills Survey (2015), almost a quarter (23%) of all UK vacancies are considered skills-shortage vacancies, meaning they are proving difficult to fill because the organisation cannot find applicants with the appropriate skills, qualifications or experience. If we also consider the Organisation for Economic Cooperation and Development (OECD) Programme for International Student Assessment (PISA) reports (2015), teenagers within the UK were the most likely to have low levels of literacy among the 23 countries surveyed, and second most likely to have low numeracy; Add to this recent figures from the Office of National Statistics on net migration; in the year to March 2017 a decrease of 81,000, driven by an increase in emigration, the future for UK employers looks decidedly bleak. Well, I am pleased to say that it is not all doom and gloom and there is unexploited employment resource in the form of highly skilled Service Leavers.

The Armed Forces have a long history of recruiting from across the societal spectrum, and today is no different. Individuals who volunteer to serve in HM Forces are required to undertake robust training in order to meet strict minimum requirements; however, during basic training many will be offered the opportunity, and actively encouraged, to enrol on an Apprenticeship as part of their personal development. As this article goes to print there are currently circa 20,000 personnel currently undertaking Apprenticeships across the Army, Navy and RAF. Although MoD supported Apprenticeships have traditionally been linked to earlier stage training and development, there is an ongoing MoD wide drive to increase the number of higher and degree level Apprenticeships available to Service Personnel.

Our modern, highly sophisticated and agile Armed Forces work in synergy with state of the art equipment to ensure the defence of UK national interests at home and abroad. In order to maintain a round the clock defence capability our Service Personnel are amongst the most technically trained and qualified in the world. To state that our Armed Forces are diverse is an understatement, technical trades include; Aeronautical engineers, mechanical engineers, Marine Engineer Submariner, Weapons Technician, Cyberspace Communication Specialist to name but a few. We also have construction specialists who are qualified bricklayers, carpenters, painter and finishers, welders and fabricators. As our Armed Force is expected to operate anywhere in the world, often at very short notice, we have our own support capability in the form of deployable Human Resource personnel, logisticians, chefs and medical support personnel. It is not uncommon for Service Personnel to be ‘double hatted’ which entails occupying an additional role such as a Physical Training Instructor, Diver, Ski Instructor or Rugby Coach, allowing individuals to develop interpersonal skills through physical activities.

However, our Armed Forces personnel are much more than just individuals who have achieved qualifications: these hard skills are underpinned by soft skills such as effective communication, working as part of a team and problem solving abilities, often tested under strenuous conditions. Good Leadership is pivotal for success in an organisation, but it is unquestionably paramount within our Armed Forces, which is why we invest heavily in Command, Leadership and Management training built on our core values of Courage, Discipline, Respect, Integrity, Loyalty, Service, Excellence and Selfless Commitment.

In Jul 2017 The Open University published research titled ‘The £2.2 Billion cost of the skills gap’, which was subsequently briefed to MPs and Peers in the Houses of Parliament. The research is clear, more than half of UK employers (53%) are unable to find suitable candidates with the required skill, opting instead to hire at a lower level with the aspiration of using training to boost these new employees’ skills and to bring them up to the level required for the role. The MoD have long recognised that supporting our Service Personnel with access to Higher Education, or professional development (upskilling), benefits both the individual; who feels a sense of achievement through personal development;, and the organisation; which can draw on, learn and improve business practices through an individual’s increased knowledge. During 2015-2016 circa 22,000 individuals utilised the highly successful Enhanced Learning Credits (ELC) scheme to obtain a Higher Educational, or professionally associated qualification. The OU study concludes that ‘over the next year (2017-2018), employers are planning to change the type of training they offer to their staff, with the number of organisations in England offering apprenticeships expected to nearly double from 31 per cent, to 59 per cent’.

As Chief of Defence People, one of my key objectives is to ensure that we retain the right number of skilled Service Personnel within the Armed Forces, and we are working hard to implement changes across the MoD to ensure that Service Personnel feel appreciated, rewarded and nurtured, throughout their career. We use independent data such as Lord Ashcroft’s Veterans Transition Review (2015) to ensure that policy makers make evidence based decision which support our Armed Forces personnel and Veterans in an ever-changing, and potentially volatile environment. The MoD rightly recognises the uniqueness of Service Life, as such we provide a resettlement offer which is the final stage of in-Service through-life learning and personal development. The Resettlement service offered to all Service Leavers is delivered through the Career Transition Partnership (CTP), which is a contracted service between MoD and Right Management Limited that currently runs until October 2021. The level of service offered varies depending on the Service person’s length of service or if special support (e.g. wounded, injured or sick) is required. In addition, Service Personnel are granted Resettlement Leave and financial advice. This highly successful partnership continues to provide our Service Leavers with employment, career and Resettlement support for two years after leaving the Service.

The Government’s Employer Engagement Survey explains that the most common skills deemed to be lacking among existing staff are people with personal skills relating to workload management and teamwork. Specialist, job-specific skills were also widely considered to be lacking, along with complex analytical skills, especially among those in high-skill occupations such as Managers and Professionals. A sentence which resonated with me is that we have to break down the old divisions between education and working life; between conventional academic achievement and lifelong employability. In these difficult times, the OU is vocal in its encouragement that UK organisations need to adopt an agile workforce that can embrace change and meet new challenges. Supporting research suggests that seven in 10 (69%) businesses believe they will struggle to hire people with the right skills in the next 12 months, implying certain skills may take longer to build.

So what do we have to offer? I think that Veterans and indeed our serving Reservists have many of the soft skills that most organisations are looking for. They work hard, working through adversity; they don’t give up and are used to taking risk where appropriate. They instinctively know how to build and work within teams, whatever the complexity of the situation. Above all they adapt and learn – we have spent all of their careers teaching them to learn, to adapt to the situation not to the book and have invested a lot in their training and education. They have and understand purpose, and still, as part of that, want to give back, as they have spent a career serving others. And they are resilient – they are mentally and physically robust in most cases, more so that many others. And the extraordinary finding of recent research showed that their spouses, even though they have not served, often have the same ethos and many of the same behavioural abilities.

say the skills shortage has

damaged their organisation. If,

as an employer, you are seeking

environment, you would be hard

pressed to find a more suitable

candidate than a Service Leaver.