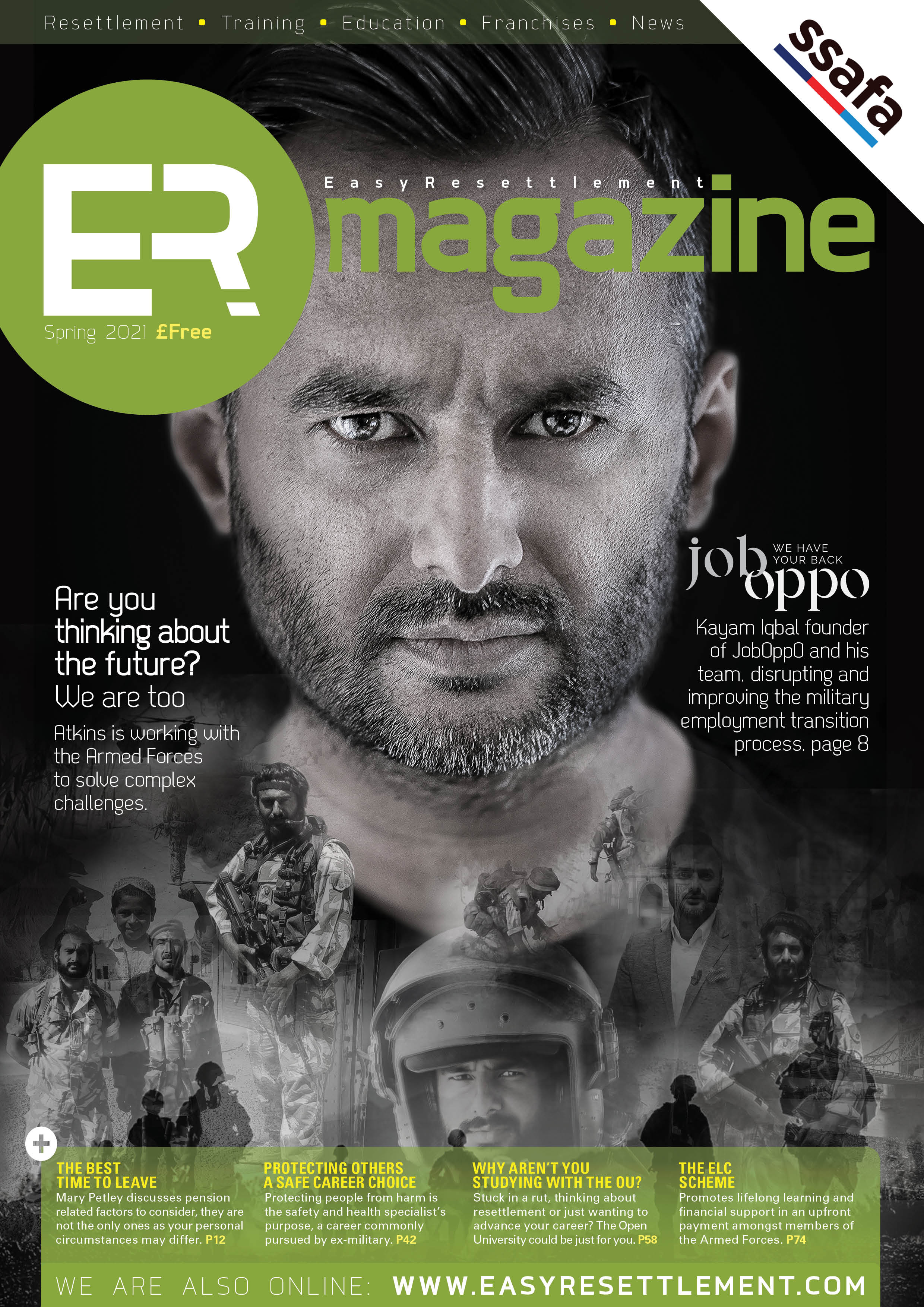 Easy Resettlement is a quarterly publication. See what is in the latest Spring edition.

Armed Forces Day 2021, how to show your support after an unprecedented year

Armed Forces Day is a chance for the British public to show support for the men and women who make up the Armed Forces community: from currently serving troops to Service families, veterans and cadets.

This Armed Forces Day, on Saturday 26 June, it is important now more than ever that we come together to recognise their efforts and show our appreciation for all the work they do.

During the unprecedented events of the past year, the Armed Forces have been steadfast in their support to the NHS and local authorities to battle the Covid-19 pandemic.

From helping to build vaccine sites, to supporting community testing and providing clinical support to the NHS, the Armed Forces are working tirelessly across the UK in the national effort to beat the virus.

The Armed Forces have also continued to deploy on operations at home and abroad, from supporting civilian agencies in Kent to alleviate border crossing congestion over Christmas, to deploying on training, peacekeeping and counter-terror missions across the world.

An Unprecedented Year for the Armed Forces
Throughout the pandemic, the Armed Forces have supported a range of MACA requests. These are Military to Civil Authorities taskings – usually used as support to flooding or natural disasters – where the specialist expertise and equipment of the military is utilised to support governments and civil bodies. During the pandemic, this has ranged from driving Ambulances in Wales, to airlifting medical supplies around the Highlands, to building NHS Nightingale hospitals, and even administering vaccines.

Lance Corporal Dikendra Limbu, a Gurkha soldier deployed on COVID-19 testing in Kent in January 2021, said “The kind words and general appreciation shown by the general public acted as a catalyst boosting the team’s morale. We are able to test up to 800 individuals per day. The whole process is conducted whilst implementing rigid force health protection protocols to ensure the safety of both our workforce and the general public.”

The Armed Forces’ support over Christmas in testing hauliers trying to cross into Europe was essential for keeping motorways running. Personnel from 36 Engineer Regiment, who had been testing hauliers at the border to Dover, were overwhelmed with donations for the HGV drivers, including 1,000 sausage rolls and 1,000 pies from one company. Members of 36 Engineer Regiment, the Salvation Army and others, re-distributed food packages, which reached families, the homeless and Foodbanks.  Even overripe fruit and vegetables were put to use, taken to zoos for monkey and animal enclosures.

The work of Armed Forces doctors and nurses has been instrumental in supporting the NHS. Corporal Pen Carless graduated as an Army Nurse after four years as an RAF medic, and her first deployment was in a COVID-19 ward in Royal Hospital Chelsea with ex-servicemen and women. Her second has been deploying in hospitals and administering COVID-19 vaccines alongside NHS staff.

Reservists and Regulars alike have found themselves deployed across the UK and beyond to support the government’s response to COVID-19. As well as trained medics, there are a huge cast of trades and skills being utilised for MACA projects. These include logistical planners supporting councils rolling out testing programmes, drivers, engineers and musicians who have been deployed to support testing sites, and many more.

One of the winning achievements was the inception of the Mobile Testing Unit at the start of April 2020 which was the idea to set up testing sites in carparks using outfitted vans to allow people to drive through without putting employees or each other at risk. This idea came straight from the military (516 Specialist Team Royal Engineers — part of 66 Works Group Royal Engineers) and was rolled out across the country, making mass-testing much safer and easier.

The Armed Forces have also been supporting the transport of supplies, including tests, PPE and vaccines, to our overseas territories, including the Caribbean, Ascension Islands and Falkland Islands. They also supported the repatriation flights at the start of the pandemic by bringing British citizens home from across the world where they were stranded.

Some individuals have stepped up to work above and beyond. Warrant Officer Scott ‘Barney’ Barnett, who works at Royal Naval Air Station Culdrose, had an interest in 3D-printing. He challenged himself to make 10,000 face visors to donate to the NHS, which he achieved and exceeded. His 13-year old daughter stitched over 100 fabric masks to donate.

Surgeon Lieutenant Commander Mike Hill has been shielding, but wanting to help, volunteered for the LGBT foundation. He says “COVID-19 has disproportionately impacted many minority communities including the LGBT+ community. We have set up rainbow buddies, a befriending service to tackle isolation and loneliness, particularly for those who are having to shield isolate.” As chair of the Navy Compass LGBTQ+ Network, he has “been reaching out to our LGBT+ Service community; providing support through talking therapy, online social activities to address isolation and providing advice on maintaining mental and physical well-being.”

This Armed Forces Day join the nation in coming together to celebrate and show our appreciation for all the work that the Armed Forces do.

Find out more information about Armed Forces Day on the official site –
www.armedforcesday.org.uk

If Covid-19 restrictions limit your plans, why not consider using video conferencing or live social media functions to arrange the following:
• Arrange for a member of the Armed Forces or a Veteran to speak in a question & answer session to find out more about their experiences.
• Invite attendees to join together to take part in an Armed Forces Day themed quiz, game of bingo or even a bake off!
• Invite a historian from your local museum to speak about the history of the Armed Forces in your area or see if they offer virtual tours.
• Coordinate with your community online to arrange a virtual ‘tea party’ complete with a suggested music playlist, recipes for baking some traditional treats and online tutorial videos for learning a new dance routine, such as a waltz or a jive!
• Arrange a virtual watch party for your community to watch a military themed film or military-history documentary online at the same time.
• Challenge your online community to take part in a ‘Build your own’ competition, using materials from around your home – for instance, build your own Spitfire, Tank or Air Raid Shelter!